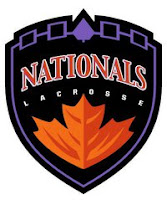 The Hamilton Nationals nearly pulled off one of the greatest comebacks in Major League Lacrosse history tonight, but fell 16-15 to the Chesapeake Bayhawks at Navy Marine Corps Memorial Stadium.

Hamilton rallied with eight straight fourth-quarter points to give them a chance to tie the game in the closing minutes. Joe Walters had a chance with 29 seconds to play, but Chesapeake’s Kip Turner made a stick save on the shot from 10 yards out.

Walters finished the game with four points, which included the 200th point of his MLL career. Stephen Keogh also notched four points with a four-goal effort for the Nats. Matt Dolente also won 18 faceoffs and scored a fourth-quarter marker.

Hamilton started slow as it fell behind 5-0 in the first. John Grant Jr. had a goal and an assist as part of a three-point night. Nationals countered with a 2-0 run. Kevin Crowley converted a Cody Jamieson pass at 7:00 to make it 5-1. Then just 35 seconds later, David Earl raced in from the left wing and scored to make it 5-2.

In the second, Chesapeake continued to pepper goalie Brett Queener and struck for three straight to increase its lead to 8-2. Keogh gave Hamilton its first goal of the second as he beat Turner from in tight at 8:42. After Steven Brooks scored for Chesapeake, Walters scored from a sharp angle at 11:47 to cut the deficit to 9-4. The goal was the 200th point of his MLL career. The teams traded goal again with Jamieson scoring for the Nationals at 12:50 to keep the deficit five at 10-5. Chesapeake, however, tacked on its second two-pointer as Danny Glading (3+1+1) scored shorthanded from 20 yards out with no time left.

Brooks and Keogh traded goals to start the third just 22 seconds apart. Hamilton was down 13-6 after Keogh netted his second of the night from the near post at 3:52. Keogh recorded his third of the night, while shorthanded, following a Dixon two-pointer. Shortly thereafter, the Nationals replaced Queener with Brent Herbst at 3:51 after a shot stung Hamilton’s starter. Westervelt closed out the scoring in the third with a rocket from the left wing with nine seconds to play.

Hamilton dominated the fourth with eight straight points. Donny Moss scored the first two-pointer of his career to get things rolling. The man-up goal was at 2:47 and cut the deficit to 16-9. Keogh then scored his fourth, and second shorthanded, to make it 16-10 at 4:53. The Nationals kept coming as Brodie Merrill scored a two-pointer at 5:09 to cut the gap to 16-12. Dolente then scored the second straight man-up goal at 5:22 and Hamilton was within 16-13. Crowley cut the margin to two with a cannon from just inside the arc and Jamieson’s man-up goal at 12:19 brought Hamilton closer at 16-15. Turner made his 10th save of the game to stop Walters and the Nationals’ final attempt was deflected wide.

Chesapeake improved to 6-1 and remained in first place in the MLL. Hamilton (2-4) is back at home on Saturday, July 7th against the defending champion Boston Cannons. Faceoff is set for 7:30 p.m.