As you may remember during the spring of last year there was a lot of discussion about the chances of an NHL franchise being relocated to the City of Hamilton.  Research in Motion co-chief executive Jim Balsillie made a $212 million bid to purchase the Phoenix Coyotes and move the team to Hamilton.

Along with the plan for this relocation was an ambitious plan to renovate the would-be NHL home for this franchise, and current home to our Hamilton Bulldogs, Copps Coliseum.

Of course the purchase was never approved by the NHL and the team did not relocate.  With all of the recent controversy about a new stadium for the 2015 Pan Am Games and future home for the Hamilton Tiger-Cats, let’s look at the current home of the Hamilton Bulldogs, Copps Coliseum.

Construction of Copps Coliseum started in 1983 and was completed in 1985 at a cost of $33.5 million. Since that time the arena has played host to a varied series of events, including being the home of the Hamilton Bulldogs since 1996. Copps was also the home to the city’s previous AHL franchise, the Hamilton Canucks, from 1992 – 1994.

As part of Jim Balsillie’s bid to move an NHL franchise to Hamilton was also a plan to renovate the aging Copps Coliseum, pictured below. Renovations were to include new atrium-style lobby with major ticketing area and new street-level retail, a new “state of the art” centre-hung video/scoreboard, fifty mid-level private suites, with bar/buffet facilities, 14-16 person capacity as well as new rink surface, ice plant and climate control systems.

With the modernized interior of the arena the exterior would also get a facelift, transforming the outside look of the arena from bland to extravagant. 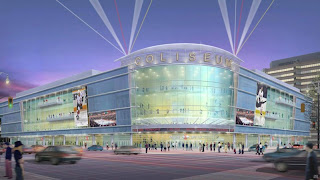 Now that the plans to bring a franchise to the city has all but fallen through the chances of this renovation taking place is unlikely, but let’s appeal to Mr. Balsillie to bring some of those dollars to upgrade Copps. Perhaps not the $150 million renovation plans originally envisioned, but the city is home to a great AHL franchise in the Calder Cup winning Hamilton Bulldogs.

The city is spending dollars right now to improve the look of York Blvd, the street that runs next to Copps, as part of a larger plan with this roadway being a gateway into the city.  Envision how much a facelift of Copps Coliseum would add to that plan.  Let’s upgrade Copps.

About Jason Nason 2248 Articles
I'm the editor of Hamilton-Today.com and I love the city of Hamilton. From sports to entertainment, local events and the politics of the city, I will try to bring it here to you!