The Saltfleet Storm took down long-time rival the Sir Allan MacNab Lions at the Hamilton public boys basketball championship winning both the junior and senior titles on Thursday night hosted at McMaster University.

Saltfleet captured their first senior boys basketball title since 2014-15 topping MacNab 64-51 in the late game with Dan Disabatino and Marko Josipovic combing for 30 of the Storm’s points.

Disabatino led Saltfleet scorers with 16 points while Josipovic added 14 in the win. For MacNab Scott Jenkins was the Lions top scorer posting 12 points in the loss.

Saltfleet built a 36-20 lead over the first two quarters, which was the difference as MacNab could only pull within 10 at the end of the third quarter. Saltfleet would record 17 points in the final frame to counteract the Lions 14 closing the game at 64-51.

This was the fifth straight season that Saltfleet and Sir Allan MacNab had faced each other in the championship final becoming a tradition among Hamilton high-school basketball fans. MacNab still holds the advantage over the past five seasons with a 3-2 record in those championship games.

The Storm junior squad were propelled by Thomas Matsell who poured in 29 points in the victory. Liam Magee chipped in 18, while Nolan Ormerod contributed 13 in the win.

MacNab’s top scorer was Nick Moore who posted 15 points in the loss while teammate Kyle Moore had 10.

Saltfleet advances to the SOSSA junior ‘AA; championship on March 1st which is hosted by Blessed Trinity Catholic Secondary School in Grimsby, Ont.

In Division-II play, Sir Winston Churchill claimed both the senior and junior titles to cap their basketball season.

The Bulldogs got the best of George P. Vanier 51-49 in a thrilling senior game that came down to the wire.

In the junior division-II championship, Churchill posted a 54-45 win over Westmount. Churchill’s Brad Vasiliauskas netted 25 points to lead the Bulldogs to the championship win. Westmount top scorer was Kevin Wang who scored 12 points in the loss. 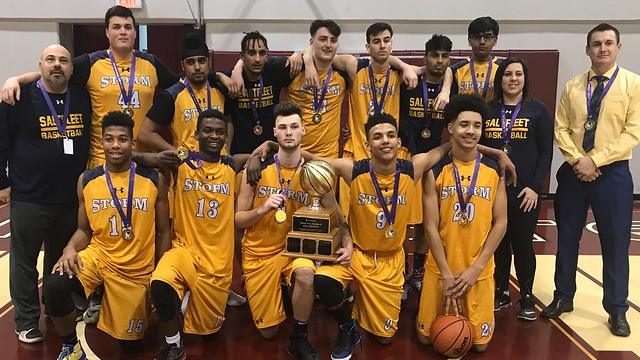 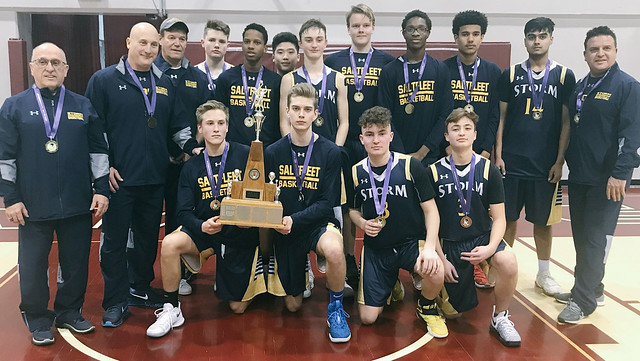